So on November 5th, I was in a competition called Devathon. Devathon is a 24-hour (technically 25 because of the DST switch) competition to make a Minecraft plugin that fits a theme, this year’s being “Machines”. Here’s what my journey through devathon looked like:

First, I woke up. I woke up an hour late because I forgot to set an alarm, oops. Then, I decided that I was going to stream this event, so I livestreamed pretty much the entire first half of me coding my entry to my Twitch page. At one point, I had gotten to 15 viewers, which for me is quite a bit, considering I’m basically just live-streaming me typing code that 95% of the world can’t understand.

After I started streaming I quickly figured out what I was going to do. I decided that I wanted to do something Overwatch related, so I decided making D.Va’s mech from the massively popular game Overwatch. Humorously I named the mech Ste.Va, as the person you play as in Minecraft is named “Steve”.

Now, in order to make D.Va’s mech, I need a way to create a 3-D object in Minecraft. To do this, I used several armor stands and constantly teleported them around the player so that they would turn, jump, and move along with the player, as long as the server wasn’t lagging. This sounds easy, but I promise that it isn’t at all. The most time consuming part of this was modelling the Ste.Va Mech.

The way that I did this was I stored a list of blocks and vectors, so that each block was associated with a vector. When the player spawns in, it adds the player’s location by the vector, and puts an armor stand with a certain-colored block on its head at that location. This made the mech appear. Now the problem was that we needed to rotate the mech as well when the player turns themselves.

The solution was actually quite simple. As the player turns, rotate the vectors the same distance. Using some basic vector math, I was able to successfully rotate each armor stand around the player, simulating a player inside of a mech.

Ste.Va’s Fusion Cannons were up next. The Fusion Cannons are basically just shotguns that continuously fire as long as you hold the mouse button down. Basically how I did these was I kept track of where the ends of the arms were, and shot arrows in the same direction the player was facing. Bukkit has built-in tools for arrow spread, so I didn’t need to do much to make them spread out the way that they did. Then I just played a nice explodey sound to make it sound like you were shooting.

After fusion cannons, I made the Defense Matrix. This was by far the second hardest thing to implement. The Defense Matrix is a trapezoid that stays in front of the player’s head, deleting all projectiles inside of it. I ended up searching through any projectiles within 10 meters of the player, and applying a bunch of math to check to see if a projectile was inside of the region. If a projectile is inside, remove it, and play a little particle effect along with a “ding” sound. Those dings are really satisfying to hear after working on that defense matrix for a few hours straight.

The boosters were probably the easiest part of D.Va to implement. Basically, when you use the boosters, it constantly sets your velocity in the direction you are looking. It also tilts the direction a small amount upward, as when you’re playing with the mech, over-the-shoulder is the easiest way to use it. If I didn’t tilt the direction upward, it would be really awkward to fly straight forward as your camera would be nearly on the ground, which just looks wrong.

I never actually got around to being able to handle things like self-destruct, as I wanted to get some sleep once it got around 5:00 am (the contest ended at 10:00 am). It was really nice to get back into Minecraft Plugin development as I haven’t done any big projects with it for a while. If you want to see the final result of the Ste.Va mech, check out the following video. I am extremely satisfied with the result! 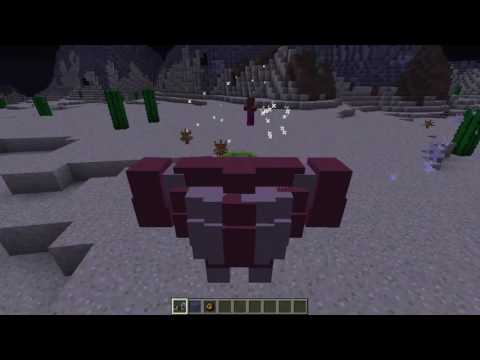 **EDIT:** I completely forgot to mention, Slikey, a dev from the Hypixel server, also did a 3D model, but his was Terminator! Check out his post here!

If you found this interesting, share it with your friends!